This event has already taken place! Please make sure you are in the correct year. ×
Dec
12
Thursday
Dec
12
Thu 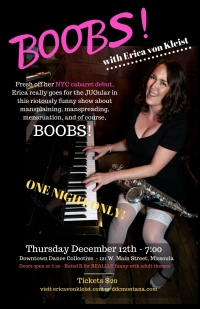 Multi-instrumentalist Erica von Kleist is fresh off her NYC Cabaret debut and is headed to Missoula with her riotously funny one-woman show called "BOOBS" at the Downtown Dance Collective. This hilarious escapade of estrogen features Erica's insane original songs about mansplaining, manspreading, menstruation, and of course BOOBS! Don't miss this one-night-only side-splitting performance by this talented musician and performer. Rated R for Really funny with adult humor.

Erica has built a career as a Juilliard-trained jazz instrumentalist, working with notable greats such as Wynton Marsalis, Kristin Chenoweth and Seth MacFarlane. But in 2018 after being denied a job interview because of her gender, she began channeling her frustration into writing satirical songs about women's issues. "I began writing music with words, which I had never done, and started performing them for my friends and family who thought they were really good. I then realized that I'm actually funny!" These songs have since turned into a one-woman show called BOOBS which Erica is now taking on the road. "I never thought I'd ever be playing piano and singing in front of others, especially being a saxophonist all my life, but these songs are too good not to share with the world. Nothing gets a message across like music and humor".

If you want to see her other talents at work, visit the Downtown Dance Collective on December 14th when Erica will be the Special Guest Artist for the 8th Annual Holiday Swing - a benefit for the University of Montana Jazz Department.
Get Tickets
Links:
http://ddcmontana.com/boobs-one-night-only/
http://www.ddcmontana.com