This event has already taken place! Please make sure you are in the correct year. ×
Dec
03
Tuesday
Dec
03
Tue 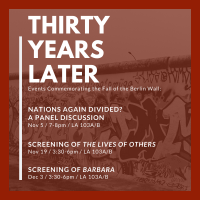 The Lives of Others, a 2006 German film directed by Florian Henckel von Donnersmark,was among the first films to dramatize events surrounding the fall of the Berlin Wall. This screening is a part of the commemoration of the 30th anniversary of the fall of the Berlin Wall, which is being presented by the German Section of UM World Languages and Cultures in coordination with the Humanities Institute.
Links: http://hs.umt.edu/hi/stories/berlin-wall.php