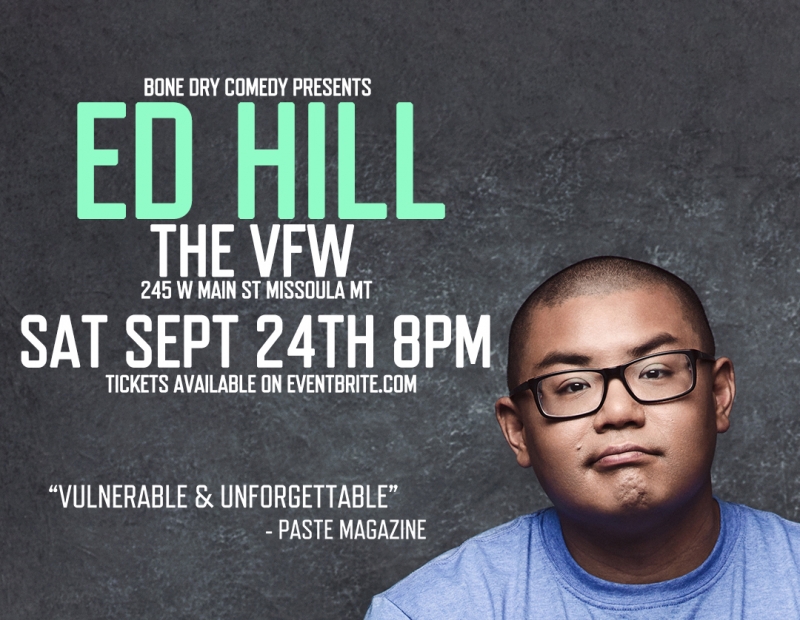 Fresh off of the release of his one-hour special "Candy and Smiley", Ed Hill is bringing the laughs to Missoula for one night only!

Join us for a night of standup comedy at The VFW in Missoula, Montana. Standup comedian Ed Hill will be visiting us all the way from Vancouver, BC to tell jokes and experience the Big Sky State.

Originally from Taiwan, Ed is an award-winning comic who moved to Vancouver, British Columbia, thinking he was on vacation at his father's discretion.

In 2021, Ed became the first comedian of Taiwanese-Canadian descent to release a full one hour comedy special titled “Candy & Smiley” with Comedy Dynamics. The special was named “Top 15 Comedy Specials of 2021” by Paste Magazine and “Best of 2021” by NPR Radio. The special is currently streaming worldwide on Amazon Prime and Apple TV.

Ed's tweets have also been featured on "The Tonight Show with Jimmy Fallon", Buzzfeed, and The Huffington Post.
Details

If you would like to partner with us on this or future events please reach out to us directly at info@bonedrycomedy.com

For more information about this event and all of the others happening around Montana please visit website bonedrycomedy.com

If you have additional questions please feel free to reach out to us via email at info@bonedrycomedy.com, or send us a message on facebook at facebook.com/bonedrycomedy.
Get Tickets
Links: https://www.eventbrite......0407?aff=MissoulaEvents