This event has already taken place! Please make sure you are in the correct year. ×
Feb
28
Sunday
Feb
28
Sun 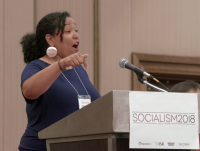 A former Marine and a public school teacher find themselves broke and unable to pay the bills, despite working multiple jobs. Activated by the energy of the 2016 Sanders presidential campaign and murmurs of a state-wide teacher strike, both turn to socialism, a once-fringe ideology, to tackle problems larger than themselves. With inequality growing, a climate catastrophe looming, and right-wing extremism ascending around the world, more and more Americans are wondering what an alternative to capitalism might look like. Is it dictatorship or democracy? Reform or revolution? The film unravels the decades-long debate around this misunderstood ideology.